The Brihanmumbai Municipal Corporation (BMC) has filed a police complaint against actor Sonu Sood at Juhu Police Station in Mumbai.

The written complaint was filed on January 4 under the Maharashtra Region and Town Planning (MRTP) Act.

According to the complaint, Sonu Sood and his wife Sonali Sood have made unauthorized changes to Juhu’s Shakti Sagar Building without the BMC’s permission. 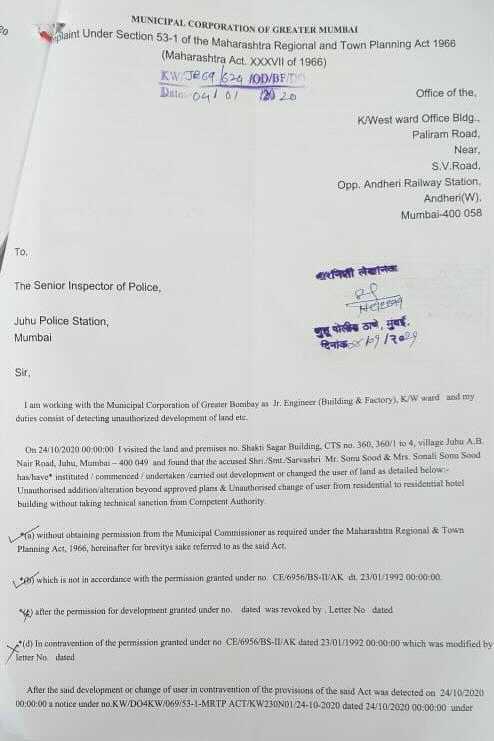 “It has been found that Sonu Sood has instituted/commenced/undertaken/carried out development or changed the user of land. Unauthorised addition/alterations beyond the approved plan and unauthorised change of user from residential to residential hotel building without taking technical sanction from competent authority,” the complaint read.

Concerned BMC officials said that even though Sonu was given a month to respond, he did not reply to the notice.

On the work front, Sonu Sood will be seen playing a lead role in the film ‘Kisaan’ directed by E Niwas. The film will be produced by filmmaker Raaj Shaandilyaa, who made his directorial debut with the 2019 comedy Dream Girl, starring Ayushmann Khurrana. Amitabh Bachchan also extended best wishes for the team of Kisaan. Apart from ‘Kisaan’, he will be seen in Chiranjeevi’s ‘Acharya’.

Did ‘The Simpsons’ predict US Capitol Hill Violence before November 3 elections?

Not PUBG, THIS game won the best game of 2020 award