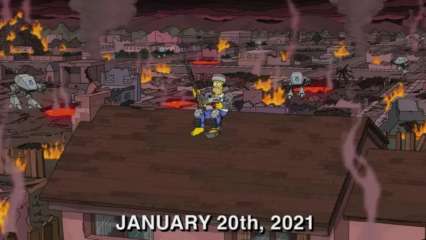 US President Donald Trump, who has refused to concede his loss to Democratic President-elect Joe Biden, led hundreds of Trump supporters to enter the US Capitol building on Wednesday (local time) in a bid to overturn his election defeat.

Amidst reports of the protests escalating in the US, social media is abuzz with the ‘prediction’ that the ‘The Simpsons’ made in the 31st Halloween special episode ‘Treehouse of Horror XXXI’. The image shows a cartoon version of Homer Simpson sitting on the roof of a house, with a gun in hand while everything is on fire around him. The picture has the date January 20, 2021, written on it. In the end, four flags are seen reading: “Pestilence”, “Famine”, “War”, and “Treehouse of Horror XXXI”.

On Election Day, Marge calls Homer and tells him to get to Springfield Elementary to vote. His daughter Lisa then enters the booth and tries to get Homer to remember everything bad about the previous four years, but Homer remembers nothing. After reading fifty things that Donald Trump did as President, Homer finally decides who to vote for. However, it turns out Homer just dreamed of voting. On inauguration day, Springfield is in chaos.

The photo started trending on Twitter with people lauding ‘The Simpsons‘ for ‘predicting everything’. Check out some reactions here.

Meanwhile, the mayor of Washington, DC, Muriel Bowser, ordered a curfew in the nation’s capital beginning at 6 pm Wednesday. Later in the day, she issued an order extending the curfew for 15 days.

This particular episode aired on November 1, 2020, before the elections in the US.

Former US President Barack Obama also said that Trump incited the violence. “History will rightly remember today’s violence at the Capitol, incited by a sitting president who has continued to baselessly lie about the outcome of a lawful election, as a moment of great dishonor and shame for our nation,” he said.

Jasmin Bhasin accepts she has been in a relationship with Aly...