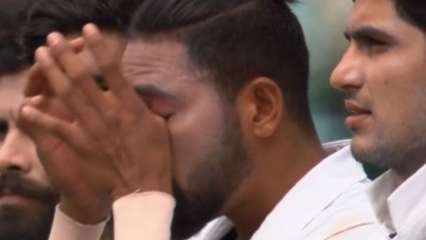 Mohammed Siraj stood proudly with the Indian cricket team before the start of the Sydney Test against Australia. When the national anthem of India, Jana Gana Mana, was being played, Mohammed Siraj was seen getting emotional and was crying when it was being played at the Sydney Cricket Ground. The emotions of Mohammed Siraj were understandable. Before the start of the Test series, Mohammed Siraj had lost his father and he could not go back to India to attend the funeral due to the coronavirus protocols in Australia. During the Melbourne Test, he made his debut and he impressed everyone by getting rid of Marnus Labuschagne and stepping up to fill the void left by Umesh Yadav’s injury as India registered a famous win on Boxing Day.

The emotions of the New Year Test and the sense of accomplishment that Mohammed Siraj has achieved so far might have overwhelmed the Hyderabad pacer and his emotions won him plenty of praise from fans all over the world. Mohammed Siraj did not disappoint as he picked up the wicket of David Warner for 5 with a full delivery which he edged to Cheteshwar Pujara at first slip.

Mohammed Siraj’s breakthough performance in Melbourne and his display in Sydney so far has shown that he is going to be a vital member of the Indian cricket team for a very long time. Mohammed Siraj’s attitude is magnificent and India will only benefit from it.

The four-match Test series is level 1-1 and the current match in Sydney has been halted due to rain.