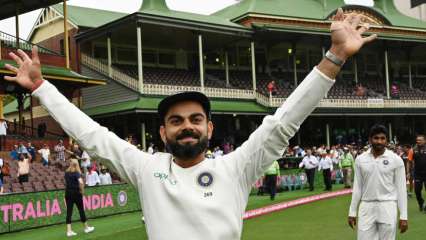 Head coach Ravi Shastri on Wednesday said that he cannot see captain Virat Kohli’s feat of winning against Australia both in away and home series being replicated by any other Indian captain for a very long time.

Under Kohli’s leadership, India had clinched the home series against Australia 2-1 in 2016/17. The Kohli and boys then scripted history as they defeated Australia in Australia 2-1 in their last tour down under.

“The satisfaction gained in registering India’s first series win in Australia after 71 years of heartbreak was immense,” cricket.com.au quoted Shastri as saying in ‘India’s 71-Year Test: The Journey to Triumph in Australia’ book.

#TeamIndia Head Coach @RaviShastriOfc launched ‘India’s 71-Year Test: The Journey to Triumph in Australia’, a new book by @BradmanBowral , at the @scg today.

He also unveiled a portrait of the legendary Sunil Gavaskar. pic.twitter.com/EP4UXoqHAq

“I cannot see Virat’s feat of winning against Australia both at home and away being emulated by another Indian captain for a very long time,” he added.

“Indian teams have done well in Australia since the turn of the (21st) century but did not have the depth of fast-bowling resources. That is why this Indian team commanded respect from the hard-to-please Aussies like few others in the past,” he added.

Kohli is on paternity leave but stand-in captain Ajinkya Rahane ensured Team India does not face any hurdle in the absence of a regular skipper.

Rahane had stepped upon the occasion as he played a match-winning knock of 112 in the first innings and then hit the winning runs in the second essay to hand India a memorable Boxing Day Test win.

The four-match series between India and Australia currently stands level at 1-1 and the third Test is slated to be played at the Sydney Cricket Ground from Thursday.

Rohit Sharma made a return to the Indian team for the Pink Test against Australia at the Sydney Cricket Ground while pacer Navdeep Saini is set to make his debut in the longest format of the game.India on Wednesday named the playing XI for the Pink Test.

Opening batsman Mayank Agarwal has been dropped from the side as Rohit replaces him. Gill will open the innings with Rohit after playing knocks of 45 and 35* in his debut Test at the Melbourne Cricket Ground.Saini comes in for speedster Umesh Yadav.

The latter sustained a strain in his left calf muscle on Day 3 of the Boxing Day Test in Melbourne and has returned to India after he was ruled out of the series.