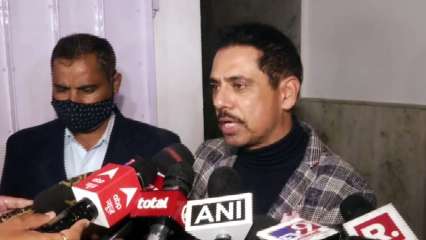 The son-in-law of Congress interim President Sonia Gandhi, Rober Vadra, has alleged that investigative agencies are harassing him as no tax evasion has been done by him.

“23,000 documents were taken away from my office. They’ve more information about me than I have in my office today. Every question they asked was answered clearly. There is no tax evasion. They send us notices in every two to three days. I would say it is harassment because if we are to answer the same question 10 times then there is a problem,” Vadra was quoted as saying by ANI.

“The agencies questioned about my business history which was answered both verbally and with documentary evidence,” he said, referring to the 23,000 documents taken away form the investigative agency from his office.

Pointing to the COVID-19 situation, he expressed reservations for being called by the ED in the ofice for questioning. “It is better that a few officers come to my office with COVID report and we would sanitize the room, than me going to an Income Tax office with 50-70 people,” he said.

On the contrary, he accused the ‘central government of using him as a political pawn’. “The government is cornered with its own issues such as farmers and people want answers. They want to divert the issue by bringing my name up because the media will get attentive and flash my name up. It has been happening for 10 years. Especially, when my family fights for farmer issues and all of this is to digress the topic and show me in a bad light,” Vadra claimed.

The ED and Income Tax Department is probing Robert Vadra, husband of Congress leader Priyanka Gandhi, under provisions of the Prevention of Money Laundering Act pertaining to allegations of money laundering in the purchase of London-based property at 12, Bryanston Square.