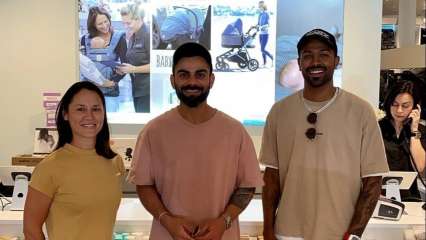 However, the alleged bio-bubble breach has now gotten some clarification with the store owner of the baby shop where Virat Kohli and Hardik Pandya visited coming forward and dismissing the allegations. Nathan Pongrass, the owner of Baby Village based in Bondi Junction, Sydney, has said Virat Kohli and Hardik Pandya did not touch or shake hands with the staff while there was ‘adequate social distancing’.

Speaking to an Australian journalist, Pongrass said that during the period of November-December, there were no new cases in New South Wales and there were no restrictions or rules related to wearing a mask at that time, Recently, there has been a major surge in coronavirus cases in Sydney’s northern beaches area and that has resulted in questions as to whether fans will be allowed for the Sydney Test beginning on January 7.

Recently, Indian cricketers Rishabh Pant, Rohit Sharma, Navdeep Saini and Kuldeep Yadav were all caught on camera eating at a restaurant. One Indian fan enthusiastically paid the bill and the Indian cricketers thanked him, with the fan stating on Twitter that Rishabh Pant reportedly ‘hugged him’. However, this resulted in a major controversy as potentially was a breach of Cricket Australia’s bio-bubble protocol. In that, it was mentioned that players could go out and eat but they could not greet anyone. The fan had to urgently issue a clarification stating that this did not happen.

All that you need to know about the new smartphone