From what looks like a photo from his teenage days, Saif is seen smiling from ear-to-ear as he poses for the picture with his dad Tiger Pataudi. In the photo, the father and son duo can be seen twinning in white kurtas.

While sharing the priceless photo, Kareena captioned it with no words but simply two red heart emojis expressing how much she loves the two of them. 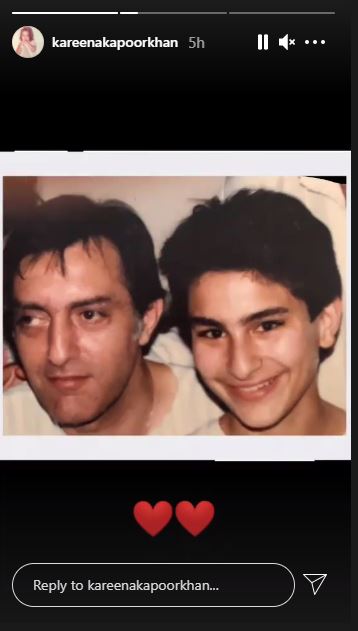 For the unversed, Mansoor Ali Khan Pataudi and actress Sharmila Tagore tied the knot in 1969. The couple welcomed son, actor Saif Ali Khan in 1970 and were blessed with daughters Saba and Soha in 1976 and 1978 respectively.

Mansoor Ali Khan Pataudi, considered one of the greatest gifts to Indian cricket and touted as one of India’s greatest cricket captains, died at the age of 70 in New Delhi in September 2011 after battling a lung infection.

Earlier, during an interview with Hindustan Times, while speaking about doing a biopic on his father, Saif had quipped, “I would love to. He is a huge icon in my mind. He was a stylish person — with his body language, the way he spoke, his attitude, and even the way he smoked his cigarettes. You can’t come close [to him]. It’s like making a film on Bruce Lee. Who is going to copy his body language? That is my main concern. Amma (Sharmila Tagore) feels Ranbir (Kapoor) can. Yes, he has a long face like my father but I don’t think he likes cricket (laughs). However, it will be great [to see a film on him]. It will be a great story about bringing India together.”

Politicos react over emergency use approval