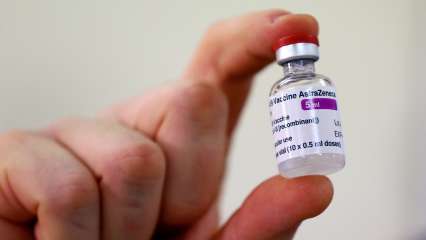 The United Kindom (UK) began inoculating its citizens with the AstraZeneca/Oxford COVID-19 vaccine on Monday (January 4), giving the shot to Brian Pinker, an 82-year-old dialysis patient, at a hospital a few hundred metres away from where the vaccine was developed.

Pinker, a retired maintenance manager, paid tribute to the scientists who had developed the shot, saying he was looking forward to celebrating his wedding anniversary.

“I am so pleased to be getting the COVID vaccine today and really proud that it is one that was invented in Oxford,” he said in a statement released by the health service.

“The nurses, doctors and staff today have all been brilliant and I can now really look forward to celebrating my 48th wedding anniversary with my wife Shirley later this year,” Pinker said.

The UK has ordered 100 million doses of the Oxford/AstraZeneca shot and is also rolling out a vaccine developed by Pfizer and BioNTech.

Sam Foster, the Chief Nursing Officer at Oxford University Hospitals NHS Foundation, spoke of her pride at giving the first dose of the Oxford vaccine outside of a clinical trial.

“It was a real privilege to be able to deliver the first Oxford Vaccine at the Churchill Hospital here in Oxford, just a few hundred metres from where it was developed,” she said.

“We look forward to vaccinating many more patients and health and care staff,” she added.

Andrew Pollard, the head of the Oxford Vaccine Group and chief investigator into the trial of the shot, also received the vaccine. He said that with record daily case numbers, the next few weeks would be a challenge despite the optimism provided by the rollout of Oxford`s vaccine.

“This is a really critical moment. We are at the point of being overwhelmed by this disease,” he told BBC TV.

“I think it gives us a bit of hope, but I think we`ve got some tough weeks ahead,” he said.