A farmer from Jalandhar protesting at Delhi’s Singhu border against the farm laws has used his creativity to modify a container truck into a fully equipped temporary home.The newly modified home has all the amenities like a sofa, bed, Tv, with mobile charging points and even a functional toilet.

The farmer, Harpreet Singh Mattu, said that he came to the protest site on December 2 at the behest of his elder brother who is settled in the US. “He asked me to serve the farmers. I left all my work and served the farmers for seven days at Singhu Border. Earlier five of my trucks came here and when I came back to my hotel, where I was staying at that time, I felt homesick and then I thought why not turn a truck into a makeshift apartment,” he said.

The makeshift home took almost one and a half days to complete along with the help of some friends. Mattu has also opened Gurudwara Shaib Riverside California Langar Sewa at the Singhu border protest site, which serves tea, snacks, and food to passersby and farmers.

“In my langar, tea is served round the clock from morning till evening. Pinni, pakoda, and almonds are also served there,” he added. 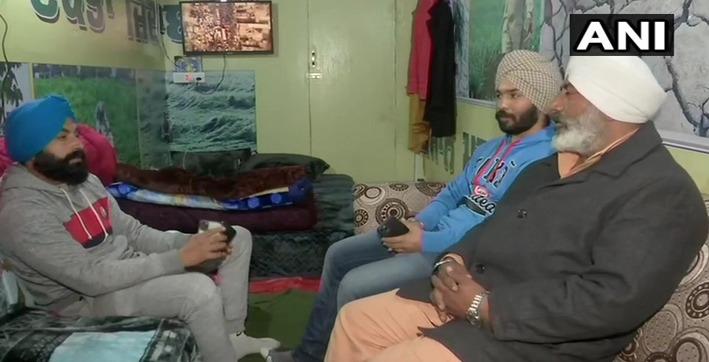 Mattu asserts that over 10,000 people are served through the langar seva each day.

To help him, his wife, son, and nephew are accompanying him, along with around 90 helpers at the site.

Thousands of farmers from Punjab, Haryana and western Uttar Pradesh have been protesting at the borders of the national capital demanding the repeal of the three farm laws, among other demands.

On January 2, Samyukt Kisan Morcha, a joint front of almost 40 farmer organisations threatened that farmers will march into Delhi on January 26 with their tractors, trolleys and other vehicles if their demands are not met and also said that a “farmers’ republic parade” will take place after the official parade.