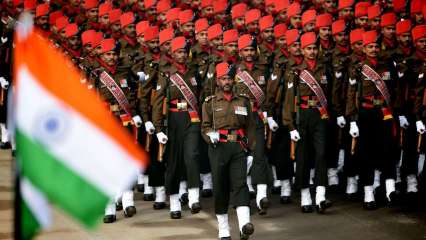 The Republic Day celebrations at Rajpath this month are likely to witness a number of changes including smaller marching contingents, shorter distance for the parade and fewer spectators compared to the previous years in view of the coronavirus pandemic.

Recently, the External Affairs Minister S Jaishankar had confirmed that United Kingdom’s Prime Minister Boris Johnson will be attending India’s Republic Day celebrations on January 26, 2021, as the chief guest, adding that it is symbolic of a new era of India-UK ties.

The government is likely to scale down the number of visitors at the Republic Day parade 2021 to avoid overcrowding and ensure social distancing amid the COVID-19 outbreak and concerns over the new virus strains.

With weeks left for Republic Day, the Indian Army continues its rehearsal for the parade on Sunday amid cold conditions in the national capital. The preparations for the celebrations are being made keeping in mind all COVID-19 protocols.

India will celebrate its 72nd Republic Day on January 26 this year, honouring the historic date when the country completed its transition towards becoming an independent republic after the Constitution came into effect.

Several other precautions are underway to ensure safety during the R-Day celebrations in view of the coronavirus situation.

Around 25,000 spectators will be allowed to witness the celebrations as against a normal crowd of around 100,000 people and children below 15 years of age will and the elderly with co-morbidities will not be allowed entry, PTI reported.

Similarly, the size of the marching contingents is likely to be brought down from around 144 in each contingent to around 96. The parade is also likely to be of shorter distance. It will start from Vijay Chowk and end at the National Stadium instead of the Red Fort, reported the news agency.

“The parade will begin from Vijay Chowk, as usual, but will culminate at the National Stadium instead of ending at the Red Fort. So, it will cover a distance of 3.3 km as compared to the normal 8.2 km,” Times of India reported.

Over 2,000 Army personnel arrived in Delhi since late November for Republic Day and Army Day parades and they are being kept in a ‘safe bubble’.

The Army Day is celebrated on January 15. Similar arrangements have been made by the Indian Navy and the Indian Air Force.Two contingents of the IAF have been selected for the parade and one of them will participate in it.

A Bangladesh Army delegation would also be taking part in this year’s Republic Day parade in view of the 50th-anniversary celebrations of the 1971 war of liberation.

After facing defeat in the 1971 war, the then Army Chief of Pakistan General Amir Abdullah Khan Niazi, along with his 93,000 troops, surrendered to allied forces, which also comprised Indian Army personnel.

In 2020, the country witnessed a relatively muted Independence Day function at Red Fort in terms of the participation of people in view of the situation created by COVID-19.