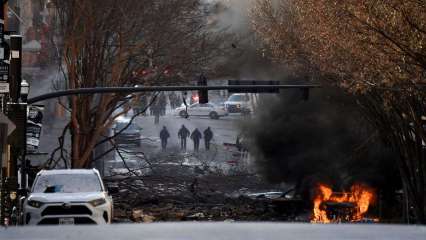 The federal investigation into the bombing in Nashville on Christmas day has uncovered evidence suggesting the suspected bomber believed in aliens and lizard people, according to a senior law enforcement source quoted by news agency Reuters.

Federal, state and local law enforcement officers have been trying to figure out why the 63-year-old suspect, Anthony Q. Warner, who died by suicide in the explosion, detonated the bomb while inside his motor home on Dec. 25 in downtown Nashville, Tennessee’s largest city.

News Channel 5 Nashville reported on Saturday that a man who knew Warner received a package on New Year’s Day, postmarked two days before the blast, containing at least nine typed pages and two thumb drives. The man turned it over to the Federal Bureau of Investigation.

While the package did not have a return address, the contents of the letter referenced various conspiracy theories, including that aliens have launched attacks on earth, which indicated it was likely from Warner, News Channel 5 said.

“We’re aware the suspect sent materials which espoused his viewpoints to several acquaintances throughout the country,” FBI Special Agent Jason Pack said in a statement, calling on anyone who had received such packages to contact the FBI.

The bombing took place in the early morning when there was little activity in the city, and an automated message emanating from the vehicle warning of a bomb allowed the police to evacuate people. More than 40 businesses were damaged in the explosion. Warner is the only known death.

In addition to the warning, the audio on Warner’s recreational vehicle played a recording of Petula Clark’s 1964 hit “Downtown” before the blast.