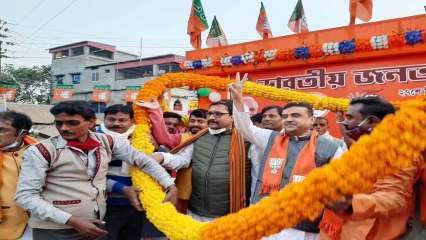 TMC-turned-BJP leader Suvendu Adhikari mocked the ruling TMC for its posters and banners in recent years carrying pictures of its supremo Mamata Banerjee. The BJP leader on Saturday (January 2) said he looks forward to a Bengal where only pictures of icons will feature on them.

Without taking any names Adhikari hinted at the posters and banners having pictures of West Bengal Chief Minister Mamata Banerjee proclaiming the state’s various development projects or ongoing state-organised festivals put up in the city and other parts of the state in which she is described as the ‘Pride of Bengal’.

Addressing a meeting in Purbo Medinipur district, Adhikari said, “We will usher in a Bengal where banners before schools, colleges and other places will only have pictures of icons like Swami Vivekananda, Netaji Subhas Chandra Bose and Rabindranath Tagore and others describing them as Pride of Bengal.”

He also mocked TMC putting up posters about the success in 100 days’ work at gram panchayats around the meeting venue. “After some time there will not be anyone to put up flag poles for TMC,” he said. Adhikari said, “TMC will cease to exist after May. There won’t be any candidate whom the TMC can field in next panchayat polls.”

Reacting to allegations about a deal between him and BJP top brass for his joining the saffron party, Adhikari said, “The deal was to give good governance to Bengal, to hold regular SSC exams and ensure fair and regular recruitment, to see to it that the state government employees are not financially discriminated, to see the unemployed youth get job opportunities, to see that industries come up instead of only shops selling fritters.”

He said the land policy of the TMC was the reason why no industries come up in West Bengal.

Alleging that there were surveillance and threat to political opponents of the state government, Adhikari said it will cease when the model code of conduct comes into existence before the poll.

Adhikari also criticised the TMC government for allegedly changing names of central projects and passing it off as state-sponsored projects.