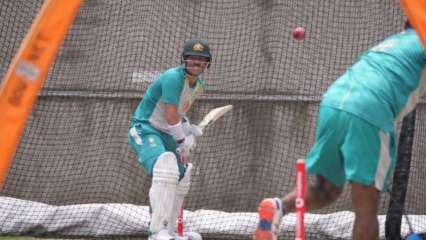 David Warner has not played for Australia since the second ODI against India in Sydney due to a groin injury. The severe nature of the injury meant that David Warner had to miss the three Twenty20 Internationals and the first two Tests in Adelaide and Melbourne. In his absence, Australia’s top order struggled with Joe Burns simply not performing upto the mark. Matthew Wade gave some aggressive starts but he failed to capitalise and his poor shot in Melbourne resulted in Australia losing momentum. Ahead of the Sydney Test, David Warner has been included in the Australia squad and he might play the Test despite not being 100 percent. David Warner has admitted that despite intensive rehabilitation, it was “highly doubtful” that he would be 100 percent fit by the time the match starts on Thursday.

“I think it`s about being smart. If I feel like I can do my duty … not be a hindrance in there in the field … I think that’s going to determine whether I play or not. I know I can manage the running between wickets (and) the shot-making that I have, it’s whether or not I am able to have that capacity of catching the ball right and left of myself … I’ve got to be agile enough to take those chances,” David Warner said.

Setting the tone of the innings

David Warner’s mobility on the field might restrict him and the injury might play on his batting as well. In David Warner’s absence, Australia have reached 200 only once in the four innings in Adelaide and Melbourne. The absence of David Warner’s aggression has been hurting Australia and the hosts will be hoping that he can regain enough fitness so that the void in the top order can be filled. If David Warner is not passed fit, then youngster Will Pucovski will make his debut after he too missed the first two Tests due to a concussion he sustained after being hit on the helmet.

“If you allow very good attacks … to dictate on their terms, and you don’t apply any pressure, it becomes difficult to score. I think there`s been a lack of urgency at the top and trying to take it to the bowlers. You don’t do that just by scoring runs – it’s loud calling, it’s shoulders back, it’s getting in their face to disrupt their line and length,” David Warner said.

The injury has meant that Warner faces a race against time both for the Sydney and Brisbane Tests. David Warner has said that it is a task but even in his absence, the attacking opener feels that there is no pressure on the batsmen in this series.

“There is always gonna be pressure but there is no added pressure on myself. I know what I have to do. I go up there every time with the confidence to try and deliver as best as I can. I don’t think there is any added pressure at all, it`s about the team doing a collective effort,” David Warner said.