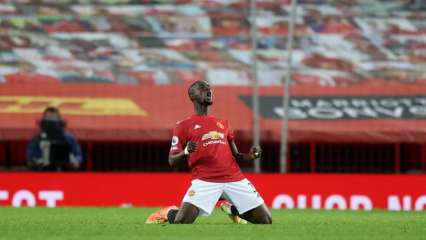 Manchester United closed in on the Premier League`s pole position after a 2-1 home win over Aston Villa on Friday put them level on points and games played with champions and leaders Liverpool. United trail their traditional rivals on goal difference with both teams on 33 points from 16 matches. Liverpool travel to Southampton on Monday. Manchester United stretched their unbeaten league run to 10 games as Bruno Fernandes capped another fine individual performance with a penalty after Bertrand Traore had cancelled out Anthony Martial`s opener for the home side. The hosts had the upper hand in the first half and Martial forced an acrobatic save from Emiliano Martinez before he buried a superb diving header past the Villa goalkeeper after Aaron-Wan Bissaka`s cross in the 40th minute.

The visitors came close through Ollie Watkins before Traore got on the end of a sharp Jack Grealish pass at the far post and beat Manchester United keeper David De Gea with a slick shot from close range in the 58th.

A late strike from Tomas Soucek gave West Ham United a 1-0 win at Everton in the first Premier League game of 2021 that had been short on fireworks until the Czech midfielder`s well-deserved winner in the 86th minute. The Hammers lost goalkeeper Lukasz Fabianski to injury during the warm-up but his replacement Darren Randolph barely had a save to make as Everton struggled to break down their rearguard. It took until just before halftime for either side to register a shot on target as Everton’s Brazilian winger Bernard fired a fizzing drive goalwards, but Randolph was alert to the danger and got down smartly to keep the ball out.

The introduction of Mikhail Antonio as a 59th-minute substitute provided a much-needed shot in the arm for West Ham and they had a flurry of chances in quick succession around the hour mark, but it was Soucek’s late strike that sealed it

The Premier League’s handling of the postponement of Fulham’s match at Tottenham Hotspur due to a COVID-19 outbreak at the West London club was ‘unprofessional’ and could have been handled better, Spurs boss Jose Mourinho said on Friday. Fulham were forced to lodge a request with the Premier League to rearrange Wednesday`s fixture due to several positive cases and the league called off the game less than three hours before kickoff. Mourinho was not too pleased about being kept in the dark till the last minute and had posted a tongue-in-cheek comment on Instagram labelling the Premier League the “best league in the world” while they waited for a decision.