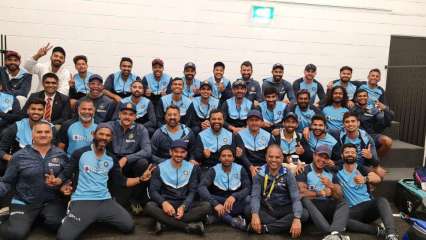 The Indian cricket team has fans all over the world and their players are immensely popular among fans. Players like Virat Kohli, Rohit Sharma, MS Dhoni and others enjoy a god-like status in the country. The Indian cricket fan is a passionate and all-loving individual who expects nothing but the best from their heroes every single time they step out onto the field. The Indian cricket team fan pays tribute to his heroes, touches their feet, shows placards of appreciation, tattoos and paints himself with the names of the players every single time they play a match whether at home or abroad. But, one Indian cricket fan showed his appreciation in a very different way.

In a series of tweets that has now gone viral, an Indian resident in Melbourne, Australia by the name of Navaldeep Singh has apparently paid the bill of the Indian cricket team players at a restaurant recently. Tweeting from his handle @NavalGeekSingh, the individual took a short video of Rohit Sharma, Rishabh Pant, Navdeep Saini and Shubman Gill eating on a table just behind him.

After taking the video, the individual ordered extra food for himself so that he could watch his favorite players. In the third tweet, he uploaded a photo of a bill worth AUD 118, which is close to Rs 6700. The fan and captioned, “They are not aware but i have paid there table bill 🙂 . Least i can do for my superstars.” When the Indian cricket team players found out, they were overwhelmed. Rohit Sharma told the individual that he must take the money. Navaldeep Singh said, “When they got know that i have paid the bill.. Rohit sharma said bhaji pese lelo yaar acha nai lagta (Take the money, brother. It is not nice).. i said no sir its on me. Pant hugged me and said photo tabhi hogi jab pese loge wapis (A photo with you is possible only if you take the money). I said no bro not happening. Finally sabane photo khichwai 🙂 mja aa gya yaar.” Rishabh Pant, in his typical humorous style, replied to Navaldeep Singh’s wife stating,” Thank you bhabhi ji for the lunch.”

The Indian cricket team secured a famous win on Boxing Day at the Melbourne Cricket Ground thanks to the brilliant captaincy of Ajinkya Rahane. The Indian cricket team skipper led from the front with his proactive captaincy, his brilliant bowling changes and his magnificent century which helped India win by eight wickets and ensure Ajinkya Rahane’s record as captain remained unbeaten.

They are not aware but i have paid there table bill 🙂 . Least i can do for my superstarspic.twitter.com/roZgQyNBDX

The Indian cricket team will stay in Melbourne till January 4 and leave for Sydney to play the third Test at the Sydney Cricket Ground.

When they got know that i have paid the bill.. Rohit sharma said bhaji pese lelo yaar acha nai lagta.. i said no sir its on me. Pant hugged me and said photo tabhi hogi jab pese loge wapis. I said no bro not happening. Finally sabane photo khichwai 🙂 mja aa gya yaar #blessed

The Indian cricket team has also received a boost with Rohit Sharma being declared the vice-captain of the team and in contention to play the Sydney Test after missing the limited overs leg and the two Tests due to a hamstring injury and quarantine rules.