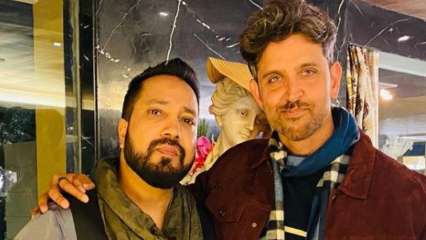 Actor Hrithik Roshan began New Year with a bash, performing to his a song from his debut film ‘Kaho Naa Pyaar Hai’.

A video shared by singer Mika Singh shows the ‘War’ actor singing and dancing to ‘Ek Pal Ka Jeena’ during the New Year celebrations which apparently the Roshan’s had organised.

In the video, while Mika sings the hit track, Hrithik is seen joining him at the mike and then giving an impromptu performance, doing the signature step of the blockbuster number that had thousands listening to the song when it was released back in the day.

Sharing it, Mika wrote: “Had a wonderful party with bro @hrithikroshan @itszayedkhan @karanbawa and @rakesh_roshan9. Thank you Kuku Bawa Saab and @rakesh_roshan9 for throwing such an amazing party. Wishing you all a Happy New Year. May God bless you with the best of health and happiness. Goodbye 2020, Welcome 2021!”

Sharing another picture with Hrithik, Mika wrote, “Bringing in the New year with my bro @hrithikroshan.”

The now-viral video received thousands of likes and views as fans lauded the actor for his killer dance moves.

“No one can beat @hrithikroshan,” wrote a user.

Meanwhile, on the work front, Hrithik Roshan will feature in the Hindi remake of the 2017 Tamil superhit film Vikram Vedha alongside Saif Ali Khan.

The original starred R. Madhavan as righteous police officer Vikram while Vijay Sethupathi played the gangster Vedha. In the Hindi remake, Hrithik will play the gangster while Saif essays the cop.

The film draws from the ancient lore of Vikram-Betaal, where a wily gangster manages to escape every time a determined cop nabs him, by narrating a new story drawn from his own life.

The Bollywood remake will be directed by Pushkar-Gayathri, who also helmed the Tamil original. The film, backed by Neeraj Panday, is expected to go on floors soon.

Two dead, including one suspect; 15 wounded in Vienna ‘terror’ attack