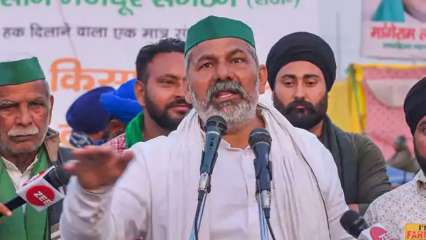 Farmer leader Rakesh Tikait on Friday (January 1) said that the next round of talks between farmers union leaders and the Centre on January 4 will take place in a cordial atmosphere. The farmers’ agitation is in its 37th day and Tikait said that they are hopeful that the Centre will give a good price to their crops. Tikait, who belongs to Uttar Pradesh, added that January 1 is a day to extend good wishes to everyone.

Tikait said that the direction of the ongoing farmers’ protest will be decided after talks with Centre on January 4. He asserted that the farmers will not call off the protest until the government decides to repeal the three new farm laws.

The sixth round of talks between the Central government and farmer unions on Wednesday (December 30) ended on a positive note, according to Union Agriculture Minister Narendra Singh Tomar. Tomar had said after the meeting that farmers union leaders have agreed to continue the talks.

Tomar had said, “the first issue was an ordinance related to the Environment. Unions were apprehensive about farmers being included along with Parali (stubble burning) ones. Both sides agreed to farmers’ exclusion. Today’s talks were held in a very good environment and it concluded on a positive note. Consensus on two out of four issues was reached between both sides.”

During the last round of talks between the two sides, the Centre had also offered to set up a committee on better implementation of MSP procurement system and also put on hold proposed laws on electricity charges and stubble burning penal provisions, but union leaders stuck to their main demand of the repeal of three contentious farm laws as their sixth round of negotiations continued for more than four hours.

Yo Yo Honey Singh unveils his music video ‘First Kiss’

ATP confirms Australian Open to start on February 8 due to...