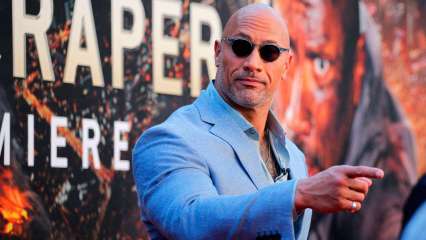 Hollywood superstar Dwayne Johnson is deeply hurt that he did not get a chance to say goodbye to his father, who passed away earlier this year. The actor got sentimental recalling his upsetting moment of 2020 on social media, which happened when a friend gifted him a paperweight with an image of him as a kid along with his father.

“I’m extremely hard to buy Christmas gifts for, so sentimental gifts like this mean the world to me. A family friend had this made for me,” he wrote on Instagram, sharing an image of the paperweight.

“A paperweight to keep on my desk of me and my dad at the gym. I was too young to hit the weights back then, but after his workouts, he’d always take me on the wrestling mats and beat my little ass. Those days were important. My old man died suddenly, earlier this year. I never had a chance to say goodbye. F**king 2020 huh?! Still a beautiful gift, I`ll cherish. #thelittlethings,” he added.

In January this year, Dwayne revealed that his father and former wrestler Rocky Johnson died of a heart attack, through a video message he shared on Instagram.

“A lot of you guys wanted to know what happened to my dad. He had not been feeling well, had been battling a cold and infection and on Tuesday he had what’s called a deep vein thrombosis, which is essentially a blood clot in the leg,” the actor said.

“It was a big old blood clot that broke free, travelled up his body, and went right to his lung and clotted his lung and he died very quickly from a massive heart attack, just like that,” he added.

“That did give me great comfort in knowing that it wasn’t prolonged and the reason why it gave me great comfort, even though I didn’t get a chance to say goodbye to my old man that one last time, is that he had been in a lot of pain for a very, very long time and that`s the life of a pro wrestler especially at that age,” he shared.