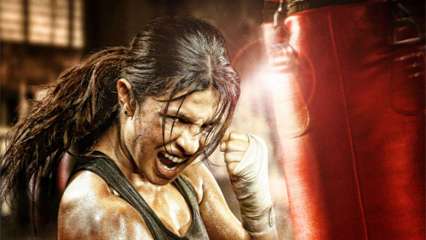 In her IGTV video’s caption, Priyanka averred that playing the role of a living national icon in Mary Kom put a load on her, adding that it is an experience that will always stay with her.

“Playing #MaryKom was not what I expected at all. The weight of telling the story of a living, national icon put a load on me that I hadn’t shouldered before. It was surreal in many ways,” she wrote alongside a video.

“She was a world champion sportswoman who was and is still competing and is on top of her game. It was an honour but also a huge responsibility for me as an actor. It was both physically and emotionally demanding requiring an extreme amount of training to not just get into the physical shape but to learn her particular style of boxing… she is left-handed and I’m right,” she added.

The actress continued, “So I had to learn to box as a southpaw which was a challenge. It’s an experience I will never forget. An amazing team and an equally supportive Mary herself saw me through it all.”

On the work front, Priyanka will next be seen in the film adaptation of ‘The White Tiger’, which she has also executive produced. Her new release is the OTT-released film ‘We Can Be Heroes’ directed by Robert Rodriguez. She is currently developing an untitled comedy with Mindy Kaling and Dan Goor, and also working on Russo Brothers’ ‘Citadel’ and ‘The Matrix 4’.

As Joe Biden inches towards victory, his links with Pakistan may...