Actor Kiara Advani and Sidharth Malhotra, who are rumoured to be dating for some time now, have been tight-lipped about their relationship status. Despite that, it’s their pictures from the same location that are now doing the talking.

Earlier spotted together at the Mumbai airport leaving for the Maldives, now, recent pictures of the rumoured lovebirds have made their way to social media. And even though there aren’t any photos of the two vacationing together, the duo did give fans a glimpse of their breathtaking view.

On Wednesday, while Kiara treated her fans to a steaming picture of herself from the beachside expressing that she is eyeing 2021, Sidharth gave a peek of his outfit of the day which happened to be a pair of blue swimming shorts on Instagram Stories. 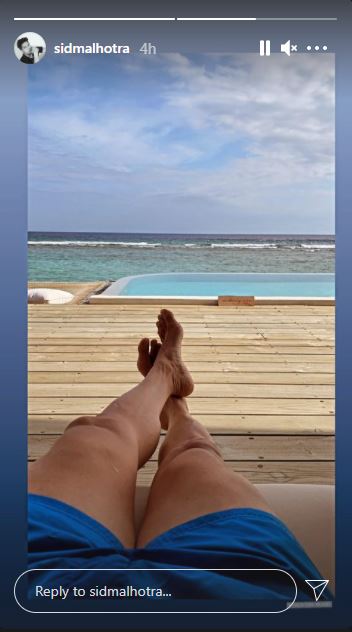 Meanwhile, the ‘Kabir Singh’ actor took to Instagram to share her stunning picture facing the sea. She adorned shimmery golden coloured backless dress and a jute hat in her hand. The ‘Fugly’ actor chose to keep her hair loose as they flow in the wind with the scenic blue sea forming the perfect backdrop to the picture.

“Lookin at you 2021,” she wrote in the caption indicating that she will be ringing in the year in the Maldives.

This comes two days after Advani wrapped up the shoot for Raj Mehta’s ‘Jug Jug Jeeyo’. She had been shooting for the film in Chandigarh.

Kiara and Sidharth reportedly rang in 2020 together on an African safari.

On Wednesday, the duo, who have otherwise kept their relationship status a secret until now, did not mind being papped together.

Meanwhile, on the work front, the duo who will be seen together for the first time in ‘Shershaah’.

Gauri Khan shares throwback picture of her 2007 look; her reaction...