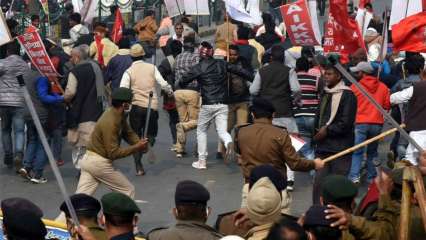 The Patna Police resorted to lathi-charge to disperse the crowd, mostly from Left parties and unions, as they marched to the Raj Bhavan to lodge their protest against the three farm laws, on Tuesday (December 29).

Thousands of Left party workers gathered at Gandhi Maidan in the afternoon and started their march. They were stopped by the police at the Dak Bungalow Chowk. Police had placed barricading at the chowk to prevent them from going towards the Raj Bhavan. According to news agency ANI, the march was organized by members of Akhil Bharatiya Kisan Sangharsh Samanvay Samiti and other Left organisations.

The police stopped the march at the Dak Bungalow Chowk using barricades and batons, resulting in a clash.

As the protesters tried to break the barricading, police resorted to baton charge, resulting in a clash.

Thousands of farmers are currently staying put at Delhi’s borders with Haryana and Uttar Pradesh in protest against the Farmers’ Produce Trade and Commerce (Promotion and Facilitation) Act, 2020, the Farmers (Empowerment and Protection) Agreement on Price Assurance and Farm Services Act, 2020 and the Essential Commodities (Amendment) Act, 2020.

The protesting farmers have expressed apprehension that these laws would pave the way for the dismantling of the minimum support price system, leaving them at the “mercy” of big corporations.

However, the government has maintained that the new laws will bring farmers better opportunities and usher in new technologies in agriculture.