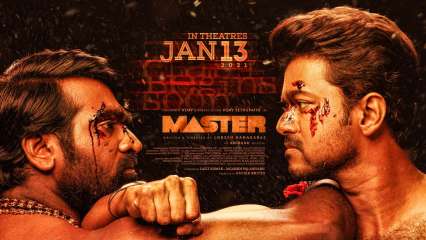 Vijay and Vijay Sethupathi starrer Master finally gets a confirmed release date. After a much delay, the makers have announced when the much-awaited film will hit the big screens. Yes, fans can witness Master on Pongal 2021 that is January 13, 2021. Director of Master, Lokesh Kanagaraj took to his Twitter page and shared four posters in different languages including Tamil, Telugu, English and Hindi. The posters have made fans go crazy and can’t wait to witness the magic on the big screen.

In the poster, Vijay and Vijay Sethupathi are seen bruised and shirtless while locking horns with each other. Lokesh captioned the posters stating, “See you soon in theatres #Master #MasterPongal #மாஸ்டர் #మాస్టర్ #VijayTheMaster.”

Check out the posters below:

Reportedly, Vijay Sethupathi would don the role of Bhavani who is a deadly gangster in the movie Master. Talking about the premise, the film is based on the clash between a college professor John Durairaj played by Vijay, and the notorious criminal Bhavani. Malavika Mohannan is starring as the female lead in the film.

Moreover, reports have it, Master is set to be one of the longest films of Lokesh with the runtime of about 178 minutes.

Master was set to be released in 2020 and reports were making the rounds that it might be an OTT release too. However, the makers made sure to treat Vijay fans by releasing the film on the big screen.

SCG confirmed as venue for the third Test