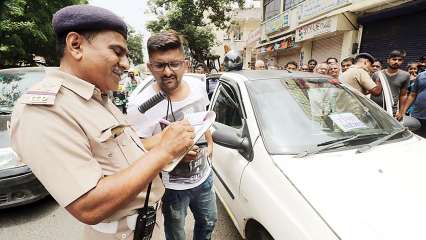 If you travel with four-wheelers in Delhi-NCR, then this news is for you only. The Transport Department of the Delhi Government has started strictness in the capital from December 15. Now in Delhi, a fine of up to Rs 5500 is being imposed on vehicles without HSRP i.e. High Security Registration Plate and without colour code stickers.

The action comes as despite all the instructions of the Supreme Court and the Transport Department, people were being negligent for a long time. But now people in Delhi who do not have this plate and color code sticker will have to pay fines. However, it is a matter of relief that at present, this challan is being imposed only on registered four wheelers in Delhi and is being done online by the Transport Department. Later, this challan will also be applied for two-wheelers and cars coming from outside states.

What is the difference between HSRP and old plate?

The main objective of HSRP is to prevent theft of vehicles. Vehicle thieves tamper with the number plate while stealing vehicles, but the high security number plate made of aluminium cannot be changed. The reason for this is that this plate has a hologram of blue Ashoka Chakra made of chromium metal which enhances its safety. Apart from this, the digits are embossed on this plate.

Automobile expert Tutu Dhawan said that some 8-10 years ago, a rule was drawn by the RTO authorities on behalf of the government. According to which, high security number plates will be placed on every vehicle. So that the theft of the vehicle can be stopped and their tracing can be facilitated. However, its advantages and disadvantages are that the devices that secure the vehicle in it are not necessarily always with the vehicle. “According to me, if thieves want to remove it in any way. Nor is our online web system so strong that even after the arrival of this system, there will be a lot of difference. And here is the matter of online challan of Rs 5500, it is too much now. Because people are under pressure not to cut my challan. So it is a non-essential burden on the general public,” Dhawan says.

The Delhi government has made it mandatory to put stickers along with the number plate. By this, it will be able to know what type of fuel such as petrol, diesel, CNG or electric vehicle is going to run. Light blue color for petrol and CNG vehicles, orange for diesel-driven vehicles and other types of vehicles will have to be fitted with gray color stickers.

Number plate can be booked online

Transport Department of Delhi Government has also made good facilities for those who cannot book these number plates offline. That is, now you can also book these number plates online. All you have to do is go to the website of www.bookmyHSRP.com. Currently, the number of centers who are facilitatig HSRP plates in Delhi is close to 350. Now the number of these centers will be increased in Delhi so that more number of vehicles can be registered. Regarding this, Delhi Transport Minister Kailash Gehlot has called a meeting on December 30, which will decide how many more centers will be opened now.

Impressive Anil Kapoor and Anurag Kashyap get stuck in a loop...