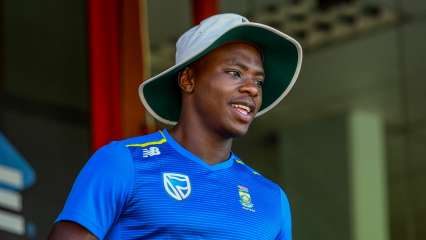 Proteas seamer Kagiso Rabada has been medically cleared of the right adductor muscle strain injury, which saw him ruled out of the One-Day International Series against England last month. He will join the Test squad, which is currently on Day Three of the first Test match against Sri Lanka from Monday.

The 25-year-old has successfully gone through all the COVID-19 and pre-Bio-Secure Environment (BSE) entry protocols and is expected to enter the BSE before the start of the second session, CSA said in a release.

South Africa without any of its lead bowlers looked listless before debutant came back to strike the visitors and get four wickets in his name. And batsmen stood up for the Proteas; owing to Faf du Plessis’ 199 and Dean Elgar’s 95 and contributions from Temba Bavuma, Keshav Maharaj and Aiden Markram meant South Afrcia got a 225-run lead in the first innings and got Sri Lanka two down before the end of the third day’s play.