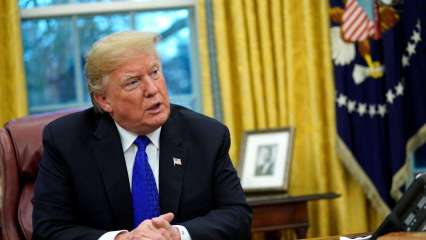 Trump, who leaves office on January 20 after losing November’s election, backed down from his threat to block the bill, which was approved by Congress last week, after he came under intense pressure from lawmakers on both sides.

The Republican president, who golfed on Sunday and remained out of public view even as the potential government shutdown loomed, had demanded that Congress change the bill to increase the size of stimulus checks for struggling Americans to USD 2,000 from USD 600.

It was not immediately clear why Trump changed his mind as his resistance to the massive legislative package promised a chaotic final stretch of his presidency.

White House officials have been tight-lipped about Trump’s thinking but a source familiar with the situation said some advisers had urged him to relent because they did not see the point of refusing.

“Good news on Covid Relief Bill. Information to follow!” Trump said in a cryptic message on Twitter earlier on Sunday evening. But he offered no explanation.

Democrats are on board with the USD 2,000 payments but many Republicans have opposed it in the past. Many economists agree the financial aid in the bill should be higher to get the economy moving again but say that immediate support for Americans hit by coronavirus lockdowns is still urgently needed.

Unemployment benefits being paid out to about 14 million people through pandemic programs lapsed on Saturday but will be restarted now that Trump has signed the bill.

The package includes USD 1.4 trillion in spending to fund government agencies. If Trump had not signed the legislation, then a partial government shutdown would have begun on Tuesday that would have put millions of government workers’ incomes at risk.

Karunaratne and Sri Lanka storm back into 2nd Test after Elgar’s...