Aadar and Tara chose to watch ‘Home Alone’. They individually shared a frame of the title as their Instagram stories, at the same time. They both shared a photo of a white blanket, underneath which they were probably watching the movie at home together.

While Aadar simply shared the photo, Tara captioned her post as, “Is there a better way to end the day?” The ‘Marjaavaan’ actress also shared a ‘Merry Christmas’ sticker to the post. 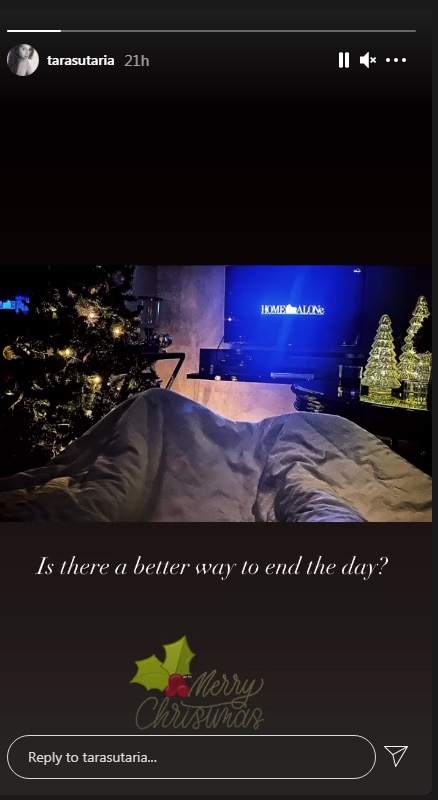 Tara had also reposted Christmas trees’ images shared by her Aadar. She called it home and captioned them, “Nothing like home and those that make it special.”

Aadar and Tara recently made headlines after flying down to Maldives on Tara’s 25th birthday. They shared pictures from the island which went viral on the internet instantly.

Before the Christmas celebrations, Tara was also part of the Kapoor Rakhi festival. She was seen along with Ranbir Kapoor’s girlfriend Alia Bhatt too.

Aadar Jain had made his Bollywood debut with ‘Qaidi Band’ in 2017. On the other hand, Tara Sutaria was seen in 2019’s ‘Student Of The Year 2’. Her movie ‘Marjaavaan’ opposite Sidharth Malhotra released in the same year. Reportedly, Tara will next be seen in ‘Ek Villain 2’, which also stars Disha Patani as the female lead. The movie reportedly features Aditya Roy Kapur and John Abraham as the male leads.