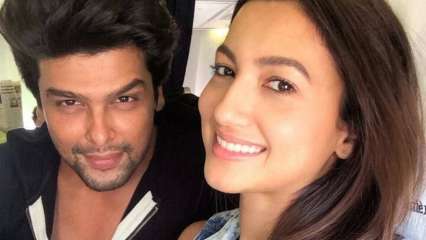 Gauahar Khan received a pleasant surprise just days post her wedding with Zaid Darbar. Her ex-boyfriend Kushal Tandon met her on a plane. The Television actor said that he was off to a shoot and wanted to congratulate Gauahar in person.

In the video shared by Kushal as his Instagram story, he is seen talking about Gauahar and how he wanted to wish her ‘Shaadi mubarak’. The two were seen in a fun camaraderie throughout the video. Kushal went a step ahead and ended the video by saying, “Haaye kismat.”

They also featured in a music video together – Rahat Fateh Ali Khan’s ‘Zaroori Tha’. The single came out soon after news about their breakup made headlines.

Years later, Gauahar’s name was linked to Zaid Darbar. She never confirmed her relationship with Zaid, till they got engaged. Gauahar and Zaid announced their engagement on social media on November 5, taking GaZa fans by surprise.

Gauahar got married to Zaid in a traditional nikkah ceremony on the eve of Christmas i.e. on December 25, 2020. While the couple got married by afternoon, they hosted a wedding reception the same night.

Videos from their mehendi ceremony where Ismail Darbar sang ‘Lutt Gaye’ had gone viral, a day before their wedding. A video of Gauahar breaking a leg on her popular song ‘Jhallah Wallah’ has also been breaking the internet.