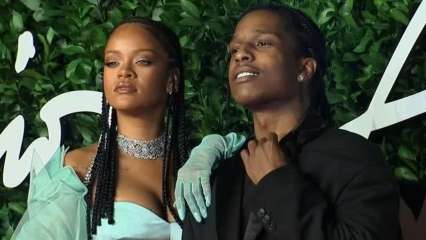 Following months of speculated romance and random sightings, Rihanna and A$AP Rocky were spotted holding hands on this Christmas Eve. According to E! News, the 32 years old supposed couple was clicked walking together while holding hands in Rihanna’s home-country, Barbados. Both of them were dressed in black while wearing masks and held hands on a pier on their way to a Catamaran sunset cruise with friends.

Rocky and Rihanna had flown separately to the Caribbean nation days earlier. As per E! News the ‘Umbrella‘ singer was born and raised in Barbados and while her family still lives there, she maintains a luxury beachfront home in Barbados.

Talking about it, a source told People, “Rihanna has been in Barbados since [last] Thursday. A$AP joined her and they are spending Christmas together with Rihanna’s family.”

While the two have been friends for years and have even worked together, neither Rihanna nor Rocky has commented on their relationship status. They had collaborated for Rihanna’s 2012 song ‘Cockiness (Love It)‘. A year later, they toured together and she also served as A$AP’s muse in his ‘Fashion Killa‘ music video.

Last December in London when they walked the red carpet together at The Fashion Awards, speculations about a possible romance were fueled. This January, Rihanna, and Rocky were also spotted sharing a laugh backstage at the 2020 Yams Day Benefit Concert in New York City.