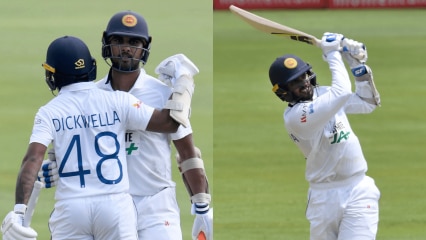 Dinesh Chandimal and Niroshan Dickwella played knocks of 85 and 49 respectively as Sri Lanka ended day one of the first Test against South Africa in a position of strength on Saturday here at the SuperSport Park.

Dhananjaya de Silva also played a knock of 79 runs before retiring hurt to take Sri Lanka`s score to 340/6 at stumps on day one.

Wiaan Mulder scalped three wickets for the hosts.After opting to bat first, Dimuth Karunaratne and Kusal Perera gave a flying start to the visitors as the duo put on 28 runs inside the first five overs. However, the hosts came back strongly and dismissed three wickets in quick succession reducing Sri Lanka to 54/3.

Karunaratne (22) was dismissed by Lungi Ngidi while Kusal Mendis (12) and Kusal Perera (16) were sent back to the pavilion by Anrich Nortje and Mulder respectively. After this, Chandimal and Dhananjaya de Silva got together at the crease and the duo took Sri Lanka`s score to 102/3 at the lunch break.

In the second session, Dhananjaya and Chandimal mixed caution with aggression and the duo took the game to the Proteas. Both batsmen took Sri Lanka`s score to 185/3, but with just half an hour to go for the tea interval, Dhananjaya retired hurt after playing a knock of 79 runs. The batsman seemed to be in severe pain after running a single and as a result, Dickwella replaced him at the crease.

The partnership between Chandimal and Dickwella flourished and the duo further strengthened the position of the visitors. Finally, a breakthrough came in the 66th over as Mulder dismissed Chandimal (85). Soon after, Dickwella (49) also lost his wicket to Mulder, reducing Sri Lanka to 296/5.