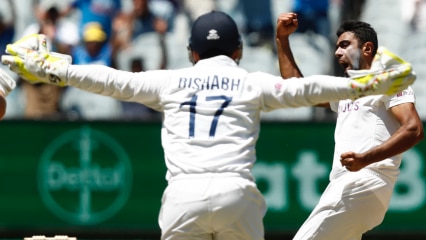 The first day of the 2nd Test of the Border-Gavaskar Trophy remained with India.

Within the four changes India made, Rishabh Pant was back behind the stumps and along with him the chirping and the commentary was back too.

One piece of his stump-mic commentary also helped India get a wicket too.

Pant almost pulled off an MSD behind the stumps as he predicted a wicket just before the ball was bowled by the off-spinner Ravichandran Ashwin.

During the first hour of the day, Pant sent his inputs through to Ashwin saying that he should keep the ball in line of the stumps as he predicted that Matthew Wade would go for his shot. As luck would have it, Wade danced down the track but could not time the ball well as he hit straight inot the hands of Ravindra Jadeja at mid-wicket.

Before the ball was bowled, Pant could be heard saying, “Andar hi rakhna, ye maarega (Ash, keep it in the line of the stumps, he’ll try to hit).”

Wade was dismissed for 30 as Ashwin got his first of the four scalps of the day.

Rishabh Pant: Ash, keep it to the stumps, he’ll definitely try to hit.

12.5: Ravi Ashwin bowls to the stumps, Wade hits the aerial shot and got out.

Rishabh Pant  He was saying from behind, “Andar hi rakhna, ye maarega” & it did happen next ball.

None of that Haha shit