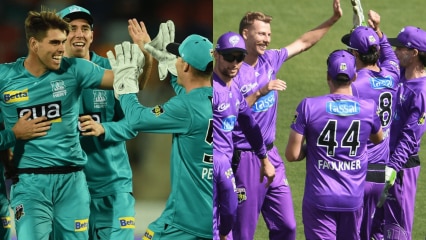 A clash between two teams at the opposite ends of the spectrum. While Brisbane Heat are still looking for their first win after three losses, Hobart Hurricanes have won three games out if the four they have played in the ongoing season of the Big Bash League (BBL).

Heat will be without their regular skipper Chris Lynn for their next six games, however, will be buoyed by the availability of England all-rounder Lewis Gregory after his 14-day quarantine ended on December 25. Heat almost pulled off a heist against the Adelaide Strikers in their last game as their stand-in skipper Jimmy Peirson stood up with a quick 36-ball 69.

Hurricanes will be confident cominng into this game as they have won three out of their four games and have looked a complete unit. Hurricanes also have World’s No 1 T20 batsman Dawid Malan available with them as his isolation period came to an end. Wicket-keeper batsman Ben McDermott has been the biggest positive for them in the last two games they have played.

The match will start at 1.45 PM IST and will take place at the Gabba, Brisbane.

Few situations where you might avoid using WhatsApp’s disappearing messages