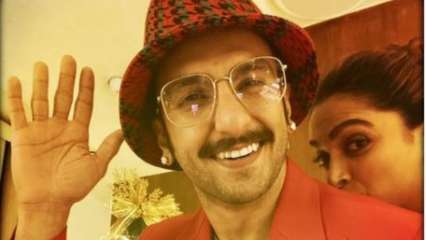 Taking to his Instagram handle, Ranveer shared an adorable picture of himself with his wife and superstar Deepika Padukone, whom he referred to as his ‘little elf’.

The post accumulated thousands of likes within a few minutes of being posted and it captures the ‘Simmba’ star in a dapper look which he completed with a red blazer and white t-shirt.

The actor accessorised his appearance with a silver pendant, big frame spectacles, and a patterned red coloured tomboy hat.

While the ‘Bajirao Mastani’s’ look did catch everyone’s attention, the most adorable part of the post is Deepika peeking-a-boo behind Ranveer, as he strikes a wave for the camera lens.

“Merry Christmas to everyone from Me and my little Elf !, @deepikapadukone,” the 35-year-old actor wrote in the caption.

Written and performed by Kaam Bhaari and Spitfire, the music video has a special appearance by Ranveer. The fun video is a satirical take on how talent is viewed by commercial machinery. While sharing the video, it has been described as “Disclaimer: No babies were harmed during the making of this video. All the adults were tormented.”

Meanwhile, talking about his special appearance in ‘Aur Karo’, Ranveer said in a statement, “The mad hatters at IncInk have outdone themselves this time. From music to lyrical prowess to vocal flow, story and characterization, ‘Aur Karo’ is a blitz screen of madness and genius. ‘Sign me up’ I said to Navzar when I heard the video concept. I had to be a part of this. So, they found a way to airdrop me in a shot, bang in the middle of the craziness. It is this world of Film and Music which doesn’t abide by any rules, that makes me feel at home. I love it.”

These people will be vaccinated on priority, check list