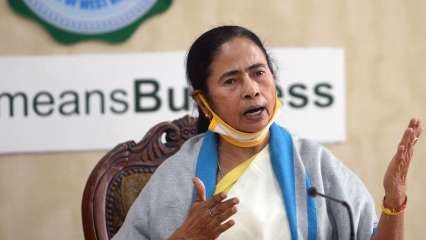 West Bengal Chief Minister Mamata Banerjee broke into a dance during the inauguration of Bangla Sangeet Mela 2020 in Kolkata.

The event took place on Wednesday in which Mamata Banerjee danced with tribal musician Basanti Hembram among a few other persons present on the stage.

At the event, in a veiled attack without naming the BJP, Mamata Banerjee said that she would not allow her state to become Gujarat.

“We have to respect and save our soil. No one can destroy Bengal. We will not allow Bengal to become Gujarat,” she said.

Speaking at the inauguration of the music fair, she said that music has no boundaries. “I only appeal that ‘Sangeet Manch’ does not believe in divisions. The music stage never believes in divisions. It’s the same if you try to divide human life; you can’t. Only our faces, gestures and colours are different but we are the same. Please don’t allow anyone to divide us. If someone says ‘Inquilab’ I don’t have any problem. It’s the same for Netaji’s ‘Jai Hind’. All are from the soil of Bengal,” said Banerjee.

“But we are all a family together. That is mankind. Fight hard against those who want to divide it. Don’t be afraid,” she said.

West Bengal Chief Minister further said, “630 Melas will be organised in December and January to create awareness and we have to move out by ensuring social distance.”

Recently, Banerjee had hit out at the central government and questioned it as to why Christmas is not declared as a “national holiday”.

“Last year and earlier also I said, why Jesus Christ’s birthday will not be declared as a national holiday? You tell me it was there earlier. Why has the BJP government withdrawn that? Everybody has sentiments. What harm have Christians done? This festival is celebrated throughout the world. This time yes there are some problems due to COVID-19 pandemic. We have to wear masks and maintain social distancing,” Banerjee said while speaking at a Christmas carnival at Allen Park in Park Street area.