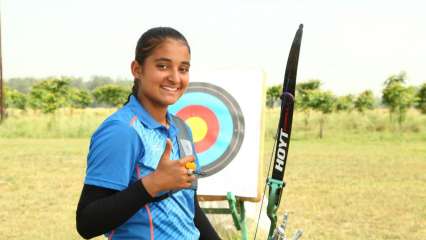 With tremendous focus, commitment and dedication, this 16-year-old archer from Karnal, Haryana practises with only one target in mind. The youngster is keen to make it to the Tokyo Olympics which is just eight months away. The Tokyo Olympics was initially supposed to be held in July-August 2020 but the coronavirus pandemic forced it to be postponed. In her separate archery enclosure at her home, Ridhi Phor has only one aim in mind and that is to qualify for the Tokyo Olympics. In her short international career, Ridhi Phor has won five international and 44 national level medals.

Ridhi is undoubtedly knocking on the door. At the two National trials held to select the three-member Indian team for the Games in January and February, she finished fourth in both, competing against much older archers with years of international experience. Evidence of Ridhi Phor’s exceptional talent had been visible for a couple of years. At her first international competition at senior level, Stage 2 of the Asia Cup in Manila in 2018, as a 14-year old, she won bronze medals as a member of the women’s recurve and mixed recurve team. In the individual event, Ridhi finished seventh in a field of 30, higher than any other Indian archer.

The Tokyo Olympics pressure and preparations will be immense but Ridhi Phor has already gotten a taste of what pressure is. In the Khelo India games last year in Guwahati, Ridhi Phor lost her focus on the second arrow in the sudden death shootout after the scores had ended tied, leaving Ridhi with a bronze medal.

However, her coach Manoj is unfazed as she has a never-say-die attitude which will help her. “Her biggest strength is her never say die attitude, when someone tells her she can’t achieve something, then she definitely will. During the Asia Cup, India was losing 5-1 vs Philippines. Ridhi ended up scoring the most points in the next four rounds and India drew 5-5 to win the tie-breaker. However, due to her young age, she is still very naive. Ridhi is very passionate and takes losses to heart. It takes her a while to get over losses in previous competitions,” Manoj said.

Pretentious, unnecessary effort to ‘keep up with’ Kardashians