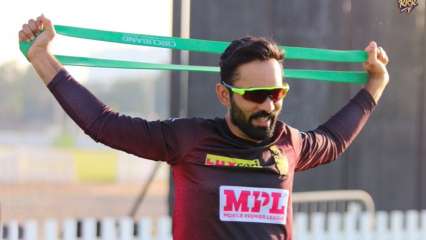 Indian batsman Dinesh Karthik will captain Tamil Nadu in the upcoming Syed Mushtaq Ali Trophy, set to begin from January 10.The Tamil Nadu Cricket Association (TNCA) named 20 players, who are set to take part in the showpiece event. All-rounder Vijay Shankar has been named vice-captain of the side.”The State Senior Selection Committee of the Tamil Nadu Cricket Association has selected the following players to represent the Tamil Nadu State Senior Team to participate in the Syed Mushtaq Ali T20 Tournament which will be held at Kolkata from 10th to 19th January 2021,” the TNCA said in an official statement.

Last week, opening batsman Murali Vijay had pulled out of the tournament citing personal reasons, ESPNCricinfo reported. Also, the side will miss the services of Ravichandran Ashwin and T Natarajan who are currently with the Indian side for the Australia tour. Motera Stadium in Ahmedabad will be hosting the knockout matches of the upcoming Syed Mushtaq Ali Trophy.

The Board of Control for Cricket in India (BCCI) has conveyed to its affiliated units that Motera Stadium in Ahmedabad will be hosting the quarter-finals (Jan 26-27), semi-finals (Jan 29), and the finals (Jan 31) of the tournament.

Yuvraj Singh is all set to come out of retirement and play cricket in India again. According to a report in Times of India, Yuvraj Singh has been named in the Punjab squad for the upcoming Syed Mushtaq Ali Trophy. However, with Yuvraj Singh announcing his retirement last year, the left-hander and one of India’s greatest match-winners is seeking the official permission of the BCCI, especially from president Sourav Ganguly and secretary Jay Shah to reverse his retirement. When Yuvraj Singh announced his retirement from all forms of cricket, he became one of the first Indian cricketers to play in an overseas T20 League and that was during the Global T20 League which was held in Canada.

Suresh Raina will will also ply his trade for his home state Uttar Pradesh in the Dommestic Syed Mushtaq Ali T20 Trophy.has been away from the game for more than one year but has been keeping himself fit and training hard for the upcoming season of domestic cricket and hopefully the next IPL season. Raina had pulled out of the recently concluded IPL season due to personal reasons but will most likely feature in the 2021 season.