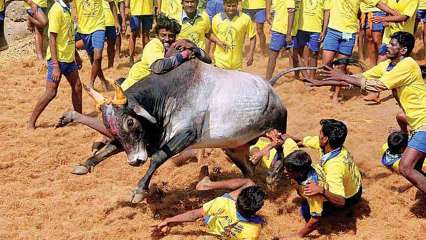 The Tamil Nadu government on Wednesday granted permission to hold the popular bull-taming sport Jallikattu in 2021, with COVID-19 restrictions. The state government permitted the authorities to hold the annual Jallikattu event with the Centre’s COVID-19 safety protocols in place.

Guidelines stated by the government

The order said that the number of participants should be between 150-300 at an event. Besides, a COVID-19 negative certificate from government recognised labs has been made mandatory for participants.

The Tamil Nadu government further stated that the number of spectators should not be more than 50% of the seating capacity of the sports arenas.

Temperature checks and wearing a mask would be compulsory for all at the Jallikattu venue.

Jallikattu is a disputed traditional event in which a bull, such as the Pulikulam or Kangayam breeds, is released into a crowd of people, and multiple human participants attempt to grab the large hump on the bull’s back with both arms and hang on to it while the bull attempts to escape.

Participants hold the hump for as long as possible, attempting to bring the bull to a stop. In some cases, participants must ride long enough to remove flags on the bull’s horns.

Jallikattu is extremely popular in Tamil Nadu as a part of Pongal celebrations on Mattu Pongal day, which occurs annually in January. However, the sport had faced a ban after protests by the Animal Welfare Board of India and animal rights organisation Peta.

However, following widespread protests in the state in 2016, the Tamil Nadu government passed an ordinance, which, with Centre’s approval, allowed it to resume since 2017.