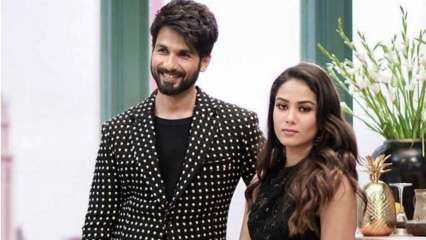 Being indulged in inspirational thoughts, Bollywood actor Shahid Kapoor delivered some Tuesday motivation for fans through his latest post.

The ‘Jab We Met’ star treated fans with a monochromatic mirror selfie in which he is seen flaunting his well-maintained beard and cool beanie cap.

Taking to the caption, Kapoor penned a motivational note for his fans. He wrote, “Dig deep. Nothing comes for free. Find that place within that loves the grind. Whatever it is that keeps you going. Pushing forward. Headwind tailwind whatever. . Keep it real and always make it count.”

Meanwhile, Shahid‘s wife Mira Rajput, who too enjoys a massive fan following on social media, shared a similar monochromatic photo on her verified Instagram handle. Copying her hsuband’s pose in the photo, for her caption all Mira wrote was ‘ditto’ and tagged husband Shahid, probably pointing that she had copied his pose and that had she written a caption alongside her photo, she would just copy-paste his as is.

Mira looked beautiful as ever in the photo. Take a look:

Earlier, the ‘Kabir Singh’ actor took to Instagram and posted a couple of selfies that showcased his killer looks. In the first snap, Kapoor is seen posing effortlessly as he lies down on the grass sporting a black hoodie and chunky black shades. The ‘Kismat Konnection’ star posted another close-up snap in which he looks off the camera amidst the rich flora in the park’s background.

The ‘Haider’ star did not caption any of the photographs.

With the post hitting the photo-sharing platform, celebrity followers including Kanika Kapoor and other fans left fire and red heart emoticons on it in the comments section.

Of late, the ‘Padmaavat’ star has been updating fans about his activities by posting pictures and videos.

Last week, he celebrated the shooting wrap-up of his upcoming sports drama film ‘Jersey’ with other cast and crew members of the flick.

‘Jersey’ is a Hindi-remake of a Telugu film of the same name helmed by Gowtam Tinnanuri. After Vikas Bahl’s ‘Shaandaar’, the sports drama would see father and veteran actor Pankaj Kapur and son Shahid sharing screen space together.

Film ‘Jersey’ revolves around a father named Arjun (Nani), a talented but failed cricketer, who decides to return to cricket in his late thirties because of his desire to represent the Indian cricket team and fulfil his son’s wish for an Indian jersey as a gift. How he makes it big despite being limited by his age forms the essence of the story.

Pujara too ‘stiff’ as per Rohit Sharma as he pulls him...