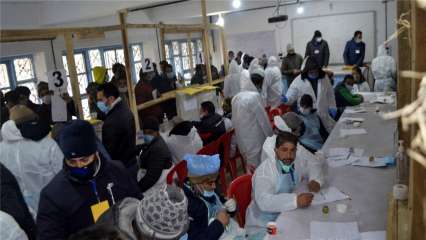 The counting of votes for the District Development Council (DDC) elections in Jammu and Kashmir on Tuesday has given a clear lead to the People’s Alliance For Gupkar Declaration (PAGD).

The People’s Alliance for Gupkar Declaration (PAGD) has bagged 82 seats and is leading in 30. Thirty-eight Independents, mainly disgruntled leaders from all political parties, have been declared winners and the same number are leading in other seats. They are followed by the BJP which had won 52 seats, including three in the Kashmir valley for the first time, and was frontrunner in 18.

The Jammu and Kashmir Apni Party (JKAP) put up a dismal performance by bagging seven seats and leading in another five. The Congress has so far won 19 seats and is leading in nine other council seats.

On expected lines, the PAGD has bagged most of the seats from the Kashmir valley while BJP has fared well in its traditional bastion of Jammu. The BJP has though been successful to break into Kashmir valley by winning three seats.

Engineer Aijaz Hussain, the BJP candidate from Khanmoh-II in Srinagar and Aejaz Ahmad Khan won a seat from the Bandipora district while Minha Lateef won from Kakpora in Pulwama.

“BJP wins 1st DDC seat in Kashmir, I Congratulate Er. Aijaz Hussain (@IAmErAijaz) on being elected from Khonmoh-II DDC Constituency of Srinagar District, it is the first win of BJP from Kashmir, I also Congratulate BJP Workers and especially Voters for their support,” J&K BJP General Secretary Ashok Kaul tweeted.

“The first lotus has bloomed in Kashmir! Engineer Aijaz Hussain wins from Khanmoh II, Srinagar, Kashmir by a good margin.”

After winning his seat Aejaz Hussain told reporters that the PAGD must revisit its policies. “People have shown faith in the leadership of PM Narendra Modi and made BJP victorious,” he said.

The DDC elections were held in the Union Territory of Jammu and Kashmir for the first time after the revocation of Article 370 and bifurcation of the erstwhile state. The newly created DDCs went to polls in eight phases from November 28 to December 22 in eight phases.

The 280 DDC seats, 14 each in 20 districts of Jammu and Kashmir, were created after the Centre amended the J&K Panchayati Raj Act of 1989 in October this year. But what made DDC polls significant is the decision of PAGD to jointly contest for preventing the BJP from making inroads into Jammu and Kashmir.

The PAGD was floated on October 7 for the reversal of constitutional changes made to Jammu and Kashmir on August 5 last year. National Conference President Farooq Abdullah was appointed president of the alliance and PDP Chief Mehbooba Mufti its vice president. The two former chief ministers were among mainstream leaders detained after the abrogation of Article 370 with Public Safety Act (PSA) slapped on them. Former chief minister Omar Abdullah was also detained and had a PSA slapped on him.

A clear victory for the PAGD is a shot in its arm and a show of its representational character to take on the BJP in its fight for the reversal of the constitutional changes made to J&K on August 5 last year. For the BJP though the challenge will be to turn the tide in its favour before the assembly elections.