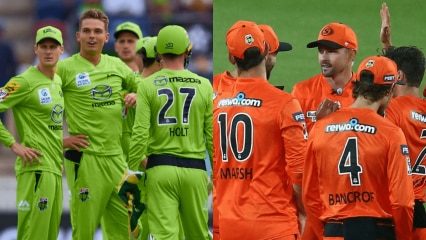 Sydney Thunder are coming off from an emphatic victory against the Brisbane Heat after Daniel Sams smashed 65* off 25 balls to give his side a come-from-behind victory in the Big Bash League (BBL) 10.

Thunder suffered a loss against the Melbourne Stars in their first game. However, a win against the Scorchers in the second gave them a much needed boost to their campaign.

Similarly for the Perth Scorchers, they lost their first game, however, they still haven’t won a game as their last game against the Stars was washed out due to rain.

Scorchers’ batsmen gave a much-improved performance with Colin Munro and Joe Clarke hitting quickfire 49 and a 34 respectively, but lost their momentum after losing a few wickets in quick succession.

Even though the Scorchers got two points form the game, they still will be looking for their first win, who were the pre-tournament favourites of this edition.

The match will start at 1.45 PM IST and will take place at Manuka Oval, Canberra.

Impressive Anil Kapoor and Anurag Kashyap get stuck in a loop...