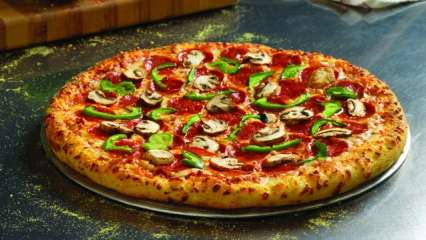 First-time parents Clementine Oldfield and Anthony Lot from Sydney in Australia have won themselves cash equivalent of 60 years of free pizza meet the condition of having a baby and calling it Dominic or Dominique.

A leading pizza franchise held a competition starting on December 9 offering $10,800 to the first parents to give their new child the name Dominic or Dominique.

Dominic Julian Lot was born at 1:47 am on December 9 – less than two hours after the competition began after 72-hour labour at Royal Prince Alfred Hospital, the Daily Mail reported.

Clementine always loved the name Dominic, and when it was suggested to him he also fell in love with it, Lot said.

Having settled on it, they received messages from family members who heard about the Domino’s competition. ‘My cousin, Dominique – believe it or not! – forwarded it to my mum for a laugh. Mum did the same,’ Lot added.

The prize is a part of a competition by the pizza chain Domino’s in Australia. With them finishing 60 years on December 9, the outlet will give away free pizza for the next 60 years to a family who gives birth to a baby and names them ‘Dominic’ or ‘Dominique’.

‘We hadn’t really thought much about it after that as we were in the middle of a long labour and were much more concerned about ensuring the safe arrival of our little baby.’

But then, the family took a chance and submitted Dominic’s birth certificate to Domino’s.

Shortly after they found out they won the cash prize of $10,080, which is the equivalent of a $14 pizza every month for 60 years.