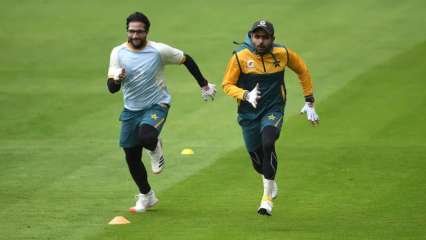 In another blow to Pakistan on their tour of New Zealand, skipper Babar Azam and opening batsman Imam-ul-Haq have been ruled out of the first test of the two-match series.

Babar due to his right thumb injury and Imam-ul-Haq due to his left thumb injury will not be available for selection for the Boxing Day Test and face the race against time to be fit for the 2nd game.

This forced Pakistan Selection committee to ring in a few changes, which meant an inclusion of youngster Imran Butt in the 17-member squad.

Babar’s ouster also meant that now, wicket-keeper batsman Mohammad Rizwan will take the reigns of captaincy for the Mount Maunganui clash, becoming the 33rd Pakistan player to captain the side for the country in the longest format.

While Babar has still not recovered from the fracture in his right thumb, while Imam injured his left during the training sessions in Queenstown last week.

According to the Pakistan Cricket Board’s (PCB) statement, the medical staff is monitoring their progress as the duo is still yet to return to the training nets.

“Decision on their participation in the second Test, which commences in Christchurch on 3 January, will be made closer to the time,” the PCB said.

This means that players in the Test side such as Abid Ali, Azhar Ali, Fawad Alam, Haris Sohail, Mohammad Abbas, Naseem Shah, Shan Masood, Sohail Khan and Yasir Shah will return to the nets.

However, Imad Wasim and Mohammad Hafeez will no longer be seen in action on the tour after the T20I series ends on Tuesday. As, Imad will travel to Australia to turn up for Melbourne Renegades in the Big Bash League (BBL), while Hafeez will return to Pakistan.

Pakistan has already lost the T20I series with a game to play, on Tuesday in Napier.

Talking about the disappointing start to the New Zealand tour, Pakistan coach Misbah-ul-Haq said, “It is disappointing to lose the T20I series against a well-settled New Zealand side, who utilised their resources and conditions to their advantage.”

“We need to up skill and improve our individual and team performances, including in Tuesday’s match, and the sooner we get these sorted the better it will be for us,” he added.