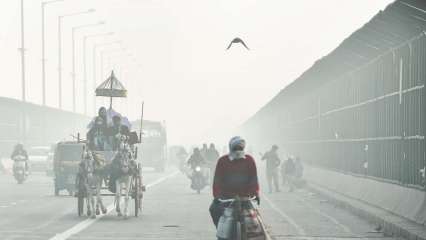 Intensifying cold wave conditions in parts of northern India has left residents shivering as temperatures dipped in the area on Sunday (December 20).

The IMD declares a cold wave when the minimum temperature is 10 degrees Celsius or below and is 4.5 notches less than the normal for two consecutive days.

There was no respite for locals in northern Varanasi city, as they struggled to carry out their daily activities in the bone-chilling cold. While some sat near the fire to warm themselves, others sipped tea to beat the cold.

In New Delhi, the situation was similar where residents dressed in multiple layers of clothing as they stepped out. Delhi on Sunday recorded the coldest morning of the season so far at 3.4 degrees Celsius, the India Meteorological Department (IMD) said.

Snowfall in states like Jammu and Kashmir and Himachal Pradesh has a direct impact in other northern states like Punjab, Haryana, Delhi and Uttar Pradesh. Parts of the famous Dal Lake in Srinagar city have frozen which makes rowing of boats very difficult in such parts of the lake.

South Asia’s winters are not as cold as other regions such as North America, but the millions of poor here are hit harder because they live in the open and do not have enough warm clothes and often die.

Yo Yo Honey Singh unveils his music video ‘First Kiss’