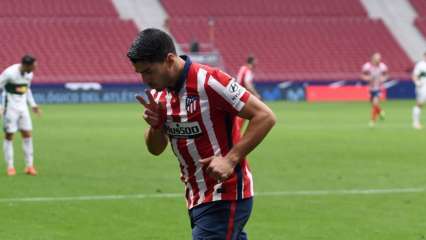 Atletico Madrid forward Luis Suarez was back among the goals to help his side to a 3-1 win at home to Elche on Saturday, taking them three points clear at the top of La Liga. The victory moved Atleti to 29 points from 12 games, three clear of second-placed Real Sociedad who have played 14 and are in action at Levante later on Saturday. Uruguay striker Suarez, who recently had a spell on the sidelines after contracting COVID-19, gave Atletico the lead in the 41st minute as he got the slightest touch on a low cross from Kieran Trippier to score for the first time since Nov. 7. Suarez then slid in to knock home another from a delightful low pass by Yannick Carrasco in the 58th for his ninth goal of the season, taking him joint top of the scoring charts alongside Celta Vigo’s Iago Aspas and Real Sociedad`s Mikel Oyarzabal.

Elche got back into the game with a header from Lucas Boye in the 64th following a well-worked corner routine, becoming the first side to score against Atletico Madrid at the Wanda Metropolitano since the first game of the season. Boye nearly found an equaliser when he swivelled to shoot inside the box but Atletico keeper Jan Oblak got across to tip the ball around the near post.

The hosts soon sealed the points though when substitute Diego Costa went to ground to earn a debateable penalty and then lashed home from the spot in the 80th. Elche’s 40-year-old striker Nino then came off the bench to try and help his side get something from the game and almost scored but saw his header cleared off the line.

Paris St Germain forward Neymar is likely to return in January after picking up an ankle injury against Olympique Lyonnais last weekend, the Ligue 1 champions said on Saturday.

Brazilian playmaker Neymar, who has previously suffered serious foot injuries in 2018 and 2019, was seen crying as he was carried off on a stretcher following a tackle by Lyon’s Thiago Mendes, who was shown a straight red card.

“Following the sprain to his left ankle, there is some bruising to the bone and he continues to undergo treatment at the training ground,” PSG said in a statement.