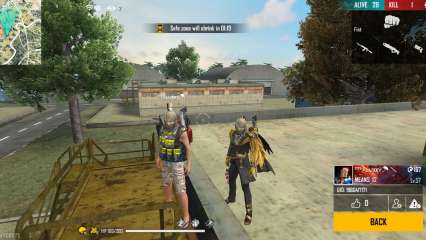 PUBG Mobile India has faced a massive delay in the country with the government not giving the permission for the relaunch until March 2021. This news has disappointed PUBG Mobile fans who are yearning for some action games. However, they will have nothing to fear as the new Garena Free Fire OB25 update has some amazing features which will simply blow your mind away. The addition of some new characters and the weapons arsenal is a thing of beauty and one that enhances the effects of the game to a whole new level. About less than a week ago, Garena Free Fire OB25 released an update which became an instant hit among gamers in both cyberspace and in real life.

In a report by The Bridge, The Garena Free Fire OB25 update, also known as the Operation Chrono update is themed on futuristic world hero called Chrono, who is said to be based on the footballing legend, Cristiano Ronaldo. Initially, there was panic as the game was down from 9:30 to 5:30 due to server maintenance issues but when the new update was launched, it became a hit. Even Cristiano Ronaldo has complimented the game, stating, “It’s a great feeling having not only a character in Free Fire modelled after me, but also having the whole universe within the game changing along with it. The Garena team has worked into the game tons of new features and elements for Operation Chrono. I hope Free Fire players all over the world are just as excited as I am.”

Along with the introduction of the new Cristiano Ronaldo character, there is an upgrade in the weapons arsenal as well. There is a new weapon called Vector Akimbo along with upgrades in the damage and recoil of fire buff of the assault rifle M4A1 and damage and rate of recoil for SMG P90. There is a new concept of Bermuda shells being introduced which can be used Fireworks.

What is Garena Free Fire?

Garena Free Fire (also known as Free Fire Battlegrounds or Free Fire) is a battle royale game, developed by 111 Dots Studio and published by Garena for Android and iOS. It became the most downloaded mobile game globally in 2019. Due to its popularity, the game received the award for the “Best Popular Vote Game” by the Google Play Store in 2019. As of May 2020, Free Fire has set a record with over 80 million daily active users globally. As of November 2019, Free Fire has grossed over USD 1 billion worldwide.

The game consists of up to 50 players falling from a parachute on an island in search of weapons and equipment to kill the other players. Players are free to choose their starting position, take weapons and supplies to extend their battle life.

The ultimate goal of the players is to survive on the island with a maximum of 50-51 players online; this requires eliminating all opponents the players encounter along the way and ensuring that they are the only survivor remaining. The available safe area of the game’s map decreases in size over time, directing the surviving players into tighter areas to force encounters. The last player or team standing wins the round. The game will be receiving a major update on Monday, December 7, bringing changes to the training map as well as introducing some updated gun.

Highlights and achievements of DGPs, IGPs conference since 2014