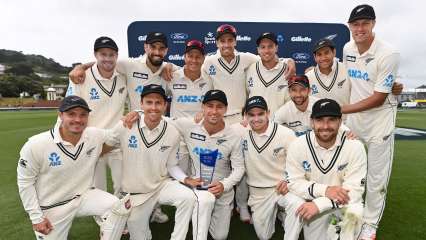 New Zealand cricket team has joined their trans-tasman neighbours Australia at the top of the Test rankings and are just marginally behind them (in decimals).

It’s neck and neck at the top of the @MRFWorldwide ICC Test Team Rankings. Australia are still No.1 with 116.461 rating points

New Zealand swept the visiting West Indies side by 2-0 pretty comfortably in the end as they achieved commanding innings wins in both the games.

New Zealand are now unbeaten in their last 15 Test matches at home, testament to their dominance in the longest format in familiar conditions.

Even though New Zealand’s success mantra isn’t a secret sauce as they play really well as a unit with both the batsmen and the bowlers able to exploit those familiar conditions fully to their advantage and destroying sides left, right and centre. Solidity of Tom Latham, Kane Williamson, Ross Taylor and now Henry Nicholls after this game and addition of Kyle Jamieson to the four-pronged bowling attack that already had Tim Southee, Neil Wagner and Trent Boult has made them the team to beat in this format, especially in New Zealand

New Zealand’s 2-0 victory has also made the World Test Championship (WTC) Points table interesting and the Blackcaps have now a realistic chance to qualify for the final, to be played at the Lord’s in June, 2021.

Blackcaps, with 300 out of 480 points have point percentage of 62.5, which means they have leapfrogged England to the third position.

Here’s how the #WTC21 standings look after the #NZvWI series

What position is your team at? pic.twitter.com/GaraAZEbz5

If New Zealand manage to win their next Test assignment against Pakistan at home by 2-0, New Zealand will have the points percentage of 70 (420 out of 600 contested).

To topple that, India will have to have five wins or four wins and three draws in the next eight matches they play in the current WTC cycle.

Australia currently sits at the top with 82.2 point percentage and even if they manage to draw the India series, they would have more or less made the finals, even though they still have an overseas Test tour against South Africa left.

For India to stay ahead of New Zealand, India will have to have minimum of 504 of 720 points (120 points * 6 series). Currently, India has 360 points in their bag and every win in their remaining eight tests will give them 30 points and a draw will give them 10 points.