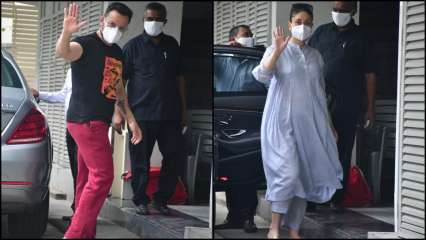 Saif Ali Khan and Kareena Kapoor Khan make fans happier with their cute gestures for each other. After spending nearly a month in Himachal Pradesh where Saif was shooting for Bhoot Police, the couple returned to Mumbai a few days back. Over the weekend, the paparazzi clicked Saif and Kareena at a clinic in the city. The Chameli actor who is pregnant with her second child went for a regular check-up and was accompanied by Saif.

A video of the couple has gone viral on the Internet in which Saif is seen showing his chivalrous side. As they were waiting for their car to arrive, Saif held the door for Kareena so that she can sit comfortably. He then closed it and walked towards his side to sit.

Check out the video below:

In the video, Saif is seen wearing a black T-Shirt and red trousers with a white mask. While Kareena wore a powder blue kurti and pants set.

Kareena who is hosting the radio show What Women Want recently interviewed Neha Dhupia. The latter quizzed Bebo if Saif and she have zeroed down the name of their second child. To which she said, “After the whole controversy of Taimur, both Saif and I have not even thought about it. We’re like going to leave it last minute and then spring a surprise.”

Meanwhile, on the work front, during her pregnancy, Kareena wrapped the shoot of her upcoming film Laal Singh Chaddha in which Aamir Khan plays the titular role. Directed by Advait Chandan, the film is slated to release during Christmas weekend 2021.

Babar Azam, Imam-ul-Haq ruled out of first test, THIS player to...