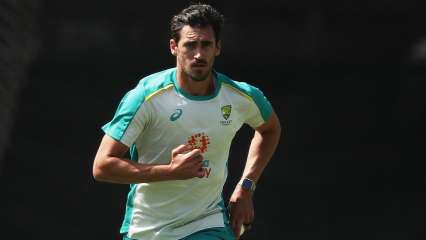 Australian speedster Mitchell Starc is on the way to be available for the first Test against India in Adelaide starting on Thursday, December 17.

The left-arm quck has rejoined the squad after leaving midway during the T20I series against India last week, to attend a family emergency.

Starc will join the Australian squad in Adelaide on Monday and will have a couple of days to train and be ready for the day-night game.

He will fly from Sydney to Adelaide on a chartered plane that will also have carry fellow Test squad members Sean Abbott, Joe Burns, Cameron Green, Marcus Harris and Mitch Swepson, along with India’s squad, who were involved in a three-day practice game at the SCG, which ended in a draw.

Even though Starc hasn’t been playing much cricket in the last week or 10 days, but fellow pacer Josh Hazlewood has backed the tall pacer to hit his straps right away and be ready to take India on.

“It’s obviously great news for us to have Starcy come in tomorrow,” Hazlewood said on Sunday.

“If we’ve learned anything from this series it’s that nothing goes to plan. We’re always struggling with the schedules and travel and different things.

“I’m sure this hiccup will be no different for Starcy. He’s a professional and he would have been doing everything he could over the last week and obviously once he comes into camp he’ll jump straight in and be ready to go,” Hazlewood added.

In case, Starc isn’t fully ready to play the game, the other two pace bowlers in the squad, James Pattinson and Michael Neser will be required to step up in his absence. Both of them were seen going through the paces under the guidance of coach Justin Langer with the pink ball under lights at the Adelaide Oval.

Langer on the other hand, was delighted to have Starc back in the squad and expressed his solidarity with Starc’s family.

“We feel for Mitch at this difficult time and we’re happy he has taken time out to spend with his family,” Langer said in a statement.

“We look forward to welcoming him back into the squad on Monday.”