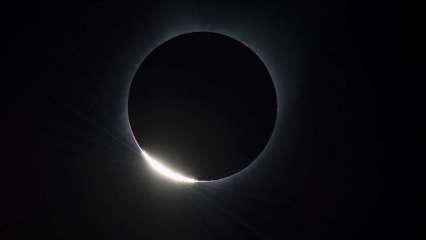 For those who keep a track of celestial happenings, there is an exciting piece of news. The last solar eclipse of 2020 is just around the corner. The solar eclipse takes place when the moon passes between the sun and the earth and blocks out the sun.

The last solar eclipse or Surya Grahan of the year can be witnessed on December 14. This total solar eclipse will best be visible from Chile and parts of Argentina in South America.

As per online sources, the solar eclipse will begin at 7:03 pm (Indian Standard Time) on December 14 and will continue till 12:23 am on December 15. It is expected to be at its peak at around 9:43 pm.

The total solar eclipse will be witnessed in the southern regions of South America and south-west Africa, whereas a partial eclipse will most likely be visible from Antarctica.

As per the IST, the solar eclipse will take place in the late evening and therefore, it will not be visible to people in India and South Asia.

The first solar eclipse of the year took place on June 21. The eclipse is nothing but the shadow of the moon covering the sun.

Apart from the solar eclipse, there have been four penumbral lunar eclipses in 2020 as well.

Scientists suggest that a year can witness as many as five solar eclipses in a year but they are visible from only limited regions. During most years, there are two solar eclipses.

The maximum number of five solar eclipses in a year was last witnessed in 1935, as per the National Aeronautics and Space Administration (NASA). It will be next seen in 2206.

Such celestial events create a lot of interest among people, with many rituals and cultural practices associated with them as well.