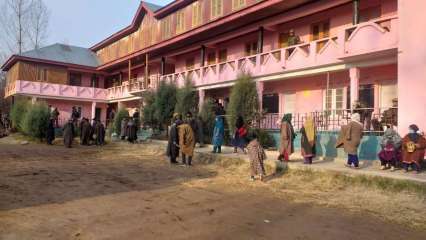 Thirty-one constituencies are set to go to the polls in the sixth phase of the ongoing District Development Council (DDC) elections, while 334 Panch and 77 Sarpanch seats will also witness voting today (December 13) across Jammu and Kashmir.

Addressing a press conference, State Election Commissioner (SEC) KK Sharma said that a total of 31 DDC constituencies would go to the polls, including 14 seats from the Kashmir division and 17 from the Jammu division.

He added that a total of 2071 polling stations had been designated — 1208 in the Kashmir division and 863 in the Jammu division.

The SEC informed the media that of the 127 Sarpanch vacancies notified in the sixth phase, 37 had been filled unopposed. There would be a contest in 77 constituencies and 229 candidates (including 65 women) are in the fray, he added.

Similarly, he said that out of the total 1548 Panch vacancies notified in this phase, 334 constituencies would go for elections with 740 candidates, including 180 female candidates.

The SEC said that all the arrangements for this phase, including manpower, election material, and security personnel, were in place.

While referring to the arrangements in place in view of the Covid-19 pandemic, the SEC said adequate measures had been taken to ensure the safety of all stakeholders at the polling stations.

Sanitizers, thermal scanners and face masks were arranged at the polling stations to ensure that the SOPs issued by the authorities were strictly followed, he added.