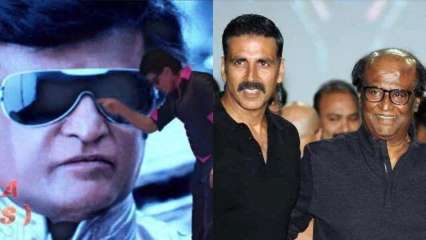 Megastar Rajinikanth turned 70-year-old under lockdown on Saturday. Fans as usual had a massive time celebrating their idol and worshipping his statues from 4 am in the morning.

Shah Rukh Khan, who had mentioned Rajinikanth in his ‘Chennai Express’ song ‘Lungi Dance’ (the lyrics literally went – all the Rajini fans ‘Thalaiva’) and saw pictures of him. Shah Rukh shared one such still to wish Rajinikanth on his 70th birthday.

Alongside the post, SRK wrote, “Here’s wishing the Birthday a very Happy Rajinikanth!!! Marking another year of superhuman-ness from the one and only Thalaiva!! Health and happiness to you always @rajinikanth sir… Love you very much!”

Akshay Kumar who had worked with Rajinikanth in Robot’s sequel ‘2.0’, also shared an image from one of their promotional events. For the uninformed, Akshay played the antagonist (who was critically acclaimed and seen as a protagonist too) in the film.

Sharing the image, Akshay posted, “Superhuman onscreen and a superb human off it…always feel fortunate to have shared screen space with you sir. Here’s wishing you a year filled with the best of health and more health. Happy birthday @rajinikanth sir.”

On December 11, AR Rahman, 69 other celebrities and Thalaiva fans unveiled the common birthday display picture (CDP) for the superstar.

AR Rahman, who had collaborated with Rajinikanth on various films in the past (including Shankar’s ‘2.0’ also starring Akshay Kumar in the lead role), was the first person to do so. The Oscar-winning music composer took to Twitter and shared the CDP which showed Rajini’s five movie avatars.

More so, the CDP also focused on Rajini’s next step in life – entering politics. For the uninformed, the superstar will enter politics with his party Rajini Makkal Mandram.

While sharing the CDP, Rahman wrote, “Extremely privileged to release superstar @Rajinikanth’s 70th Birthday CDP on behalf of his fans. Wishing you a great birthday and good health! #HBDSuperstarRajinikanth.”

Extremely privileged to release superstar @Rajinikanth’s 70th Birthday CDP on behalf of his fans. Wishing you a great birthday and good health!#HBDSuperstarRajinikanth pic.twitter.com/SYWxRyOFqD

Watch what happened on his debut for Indian cricket team on...